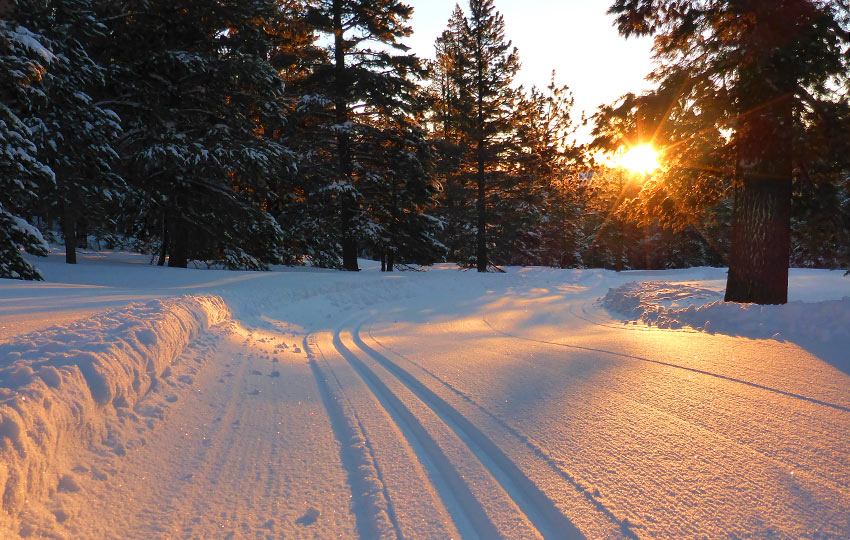 Where do You Plan to Cross-Country Ski?

There’s a tool for every job and a job for every tool. So, understand that there is no one set of cross-country skis that will accommodate all environments.

Cross-country skis and the gear that goes with the sport is similar to any other outdoor gear. Everything is designed to function optimally so long as it’s used within a recommended framework of conditions.

I understand that you probably don’t want to buy an entire quiver of skis to meet every possible situation. So, if you’re new to cross-country skiing and looking to buy a setup, my best recommendation is …

Consider the type of skiing you will most often do and buy gear to meet that need.

This is the first major decision you’ll have to make when determining what type of skis to buy.

Will you be primarily cross-country skiing at groomed resorts or off the beaten path?

Of the three general categories of cross-country skis (listed below):

There is obviously overlap with all of these styles of cross-country skiing. For example, you could use traditional classic skis, and even skate skis under the right conditions, in untracked terrain.

Or, you could use backcountry skis on groomers, but you would probably won’t be able to use them in the standard classic tracks since this type of ski is generally too wide for them.

If you want to maximize your experience, however, it’s best to use the right ski for the right situation. So again, you should narrow down your focus and acquire cross-country ski gear that will accommodate your intended skiing experience.

Should You Buy New or Used Equipment?

This is usually the follow-up question I’m asked after discussing with the customer the pros and cons of the different types of skis and equipment available.

The decision to buy new or used equipment is the second big decision you’ll face when buying cross-country skis.

If you can get some free gear from your long-lost uncle or grandparents, give it a whirl. However, you’re probably not going to be nearly as happy as having equipment that properly fits your body size and skill level.

The reason I don’t advocate buying used gear as a beginner is because it’s difficult to evaluate the equipment without having much knowledge or experience to draw upon.

Who knows how much punishment those skis have taken? Who knows how many sets of bindings have been mounted and re-mounted on the skis during their lifespan?

In the 2016/2017 season, a customer brought in a pair of used classic cross-country skis for me to evaluate. He inherited them from a friend and said he couldn’t seem to get them to work.

I assumed that either his skis weren’t appropriate for his weight or that his technique was lacking (or both).

I find that these are the two most common reasons for people not having much success with cross-country skiing. Fortunately, both of those factors can be remedied through the use of correct gear and taking some cross-country ski lessons.

Anyway, when the customer handed me the skis I realized as soon as my fingers touched the bases that something was amiss. The skis were an older “waxless” set that featured a standard scale pattern for the time, but one of the skis literally did not have any pattern on it! A completely smooth base, like you’d find on a skate ski. The thing had to have been a factory defect, but neither he nor the previous owner realized the anomaly.

Well, maybe his friend actually did know and was pulling his leg. Either way, the guy didn’t pay any money for them but they were essentially unusable.

You don’t need to buy top-of-the-line skis if you are new to the sport. In fact, I would discourage you from doing that just like I would not recommend buying a high-performance sports car for your teenager who just earned their driver’s license.

The risk for catastrophe (to you or the expensive skis) is too high. And high-end cross-country ski gear is relatively costly and requires you to be an exceptional skier in order to reap its benefits.

Take comfort in the fact that, in general, cross-country ski gear is affordable compared to other sports.

Where Should You Buy Cross-Country Ski Gear?

Whenever possible, buy local. However, finding a shop near you that sells a variety of cross-country ski equipment can be hard to find.

Alpenglow Sports in Tahoe City has a good selection, passionate staff, and is a very community-oriented store. And in Minnesota (where I grew up) you’ll find Gear West. I stop there whenever I go back to visit my parents because they have a huge selection, expert staff, and a major online presence.

If you can’t make a special trip to visit them, you could always order through their website. Of course, there are also other options such as REI, Backcountry.com, etc.

Many stores, whether they be a physical or online shop, will offer package deals that include all four components of a cross-country ski setup. This is a good way to go if you don’t have anything.

The drawback to this is that you can’t actually try on the boots.

You can purchase skis, bindings, and poles without having to test them out in any way. They’re based on your height and weight. However, boots are something that you should actually wear, if possible, before buying. So even though I recommend doing this, I understand it’s easier said than done.

Another note about buying used gear is …

If you buy everything separate, like on Craigslist or at a ski swap, you may wind up with incompatible gear. The great deal you got on those skis may be irrelevant if you can’t find boots to go with the bindings (already mounted on those skis).

Trust me on this.

There have been a number of different binding variations over the years and not everything is compatible. And at first glance they all basically look the same. In fact, even the so-called pros mess it up from time to time.

Another story from the 2016/2017 season … a customer came in to have his classic cross-country skis waxed. He recently purchased the skis “used.”

Right after buying those skis he went to a popular cross-country ski shop near Lake Tahoe and bought a pair of combination boots (used for classic and skate skiing) and some new bindings for his skis. The shop also mounted these for him.

His intention was to eventually buy a set of skate skis, too. He would then have one pair of boots that could be used for both sets of skis. Brilliant! I fully support this idea. However, the bindings he was sold were not compatible with the boots he bought. Talk about a raw deal!

He specifically bought the boots and the bindings at the same time in order to get a compatible system, yet the shop still screwed it up and he was not knowledgeable enough to realize the mistake.

Also, the bindings he bought were way too small for the skis on which they were mounted. He was a large man and his skis were massive in that they were not only really long, but excessively wide for use on groomed trails. The skis were an older style most likely designed to use a three-pin binding system instead of the more contemporary and streamlined NNN and SNS bindings.

Although, you can purchase an NNN BC (backcountry) version which features a longer and stronger bar (but isn’t compatible with NNN). That BC version would withstand the amount of force he would place on the skis while making more aggressive turns.

He would’ve then had to buy a BC compatible boot, however, which would’ve made it impossible to use one boot for the two sets of skis.

Or, he should’ve purchased newer and skinnier classic skis in the first place which would’ve married better with the traditional bindings.

Long story, short… unless you know what’s what, just find a package deal that includes all cross-country ski components and supports your intended use.

Dramatic skies out there this morning 🤩 . YouTu

Birding from the front porch, inspired by @tahoesn

Crossing my fingers for more snow this week ❄❄