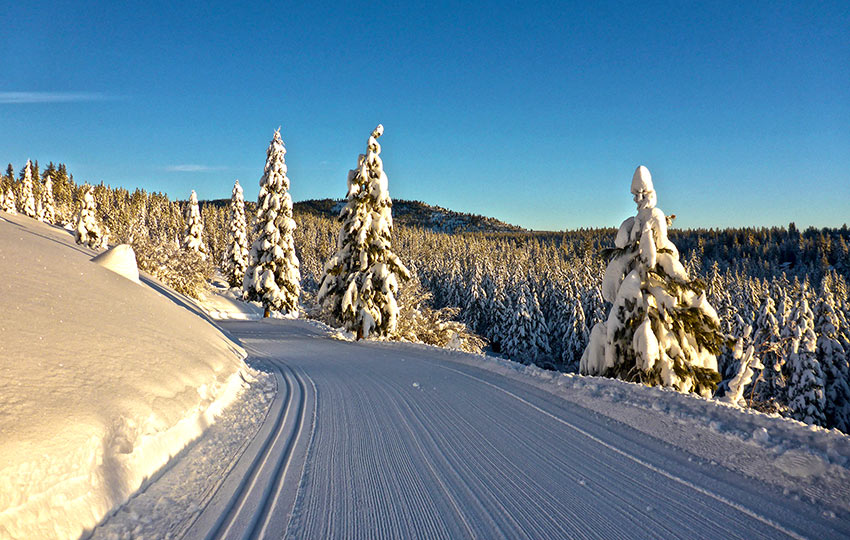 Skis were created, as you might expect, to be a mode of transportation over snowy terrain. For example, people used them to travel from one place to another and to chase down wild game during the winter. So, skis were (and still are!) designed to provide the fastest and most efficient means of travel across snow.

Now, this article is about cross-country skiing. However, I have to admit that downhill skiing, having been around since the 1800s, is arguably a more popular form of skiing. That said, cross-country skis are the original skis … like thousands of years old original.

Contemporary cross-country skis are obviously superior to their millennia-old predecessors. And, skiing as a means of survival has taken a back seat to skiing for enjoyment and sport. But the drive for efficient and effective travel over snow remains. This is especially true for locations that experience snowy months for half or more of the year.

I mean, you have to have some healthy activity to keep you sane during the winter!

People often equate cross-country skiing with the image of a sole skier effortlessly gliding across an open meadow or an undulating landscape.

Clearly, there are countless other scenarios and environments in which to use cross-country skis. But they nearly always involve skiing or gliding across variable terrain. Hence, the term “cross-country” skiing. I realize this notion is probably not revelatory. However, I just wanted to clarify that it would be a stretch to equate xc skiing with standing in a lift line and riding a chairlift up a mountain. Then, after bombing down a steep descent, doing it all over again.

There’s no question that xc skiing and alpine skiing stem from the same origin and share some basic characteristics. But they’re definitely not the same.

To Cross-Country Ski is to Overcome Friction & Gravity

Friction is the naturally occurring force that prevents two surfaces (or layers in contact with each) other from moving. Therefore, the goal behind the design of any type of ski is to reduce friction when gliding.

The skis also need a mechanism for stopping and turning. And, in the case of cross-country skiing, they need to be able to move forward on flat land and up hills. But, when it comes down to it, friction is the main factor that all skis (and skiers) must overcome.

Additionally, the force of gravity works against a cross-country skier in their quest to glide over diverse terrain. Just consider the effort required to overcome friction while using gravity to ski downhill. And then think about how much effort it would take an xc skier to glide across flat or uphill terrain. That takes some work, let me tell you!

Believe it or not, though, you can glide uphill with proper technique and great conditioning. This is one reason why I love xc skiing so much!

So the design of a classic cross-country ski not only allows for downhill travel but, more importantly, across the flats and up hills.

This is in direct contrast to alpine skis, which are designed primarily for descending steep hills.

The reason for this isn’t just so you can become a fellow Nordic nerd. Rather, it’s because the three main phases of classic xc skiing (aka Diagonal Striding) are directly related to the design of the ski. The three principles include pushing off, transferring your weight from one ski to the other, and then gliding.

I don’t know if technique evolved based on the design of the ski. Or, whether or not skis evolved as a result of the application of technique. However, I suspect that the evolution was symbiotic in that technique and design equally fueled each other’s progression over time.

But whether or not the chicken came before the egg is irrelevant. Cross-country skiing skis and techniques are inseparable.

So, you need to understand how a ski is designed in order to effectively apply technique.

And, if you never learn proper technique you’ll never be able to have the most fun during your cross-country skiing experience.

Long story short, by understanding all of this stuff you won’t get winded so quickly! And, that’ll enable you to travel further safely and with greater ease!

Anatomy of a Classic Cross-Country Ski (in a nutshell):

The design of classic skis and the application of proper technique allow you to achieve efficient travel across variable terrain. In order to accomplish this, classic xc skis feature three design elements related to technique. These are their geometry, grip zone, and bindings.

In addition to reducing friction when gliding, those three things support push-off and weight transfer. And, both of those skills enable you to move forward.

In future articles I’ll discuss in more detail the design components of classic skis, as well as the relationship between skis and technique. For now, though, just know that classic skis are designed to work in concert with classic technique, and vice versa.