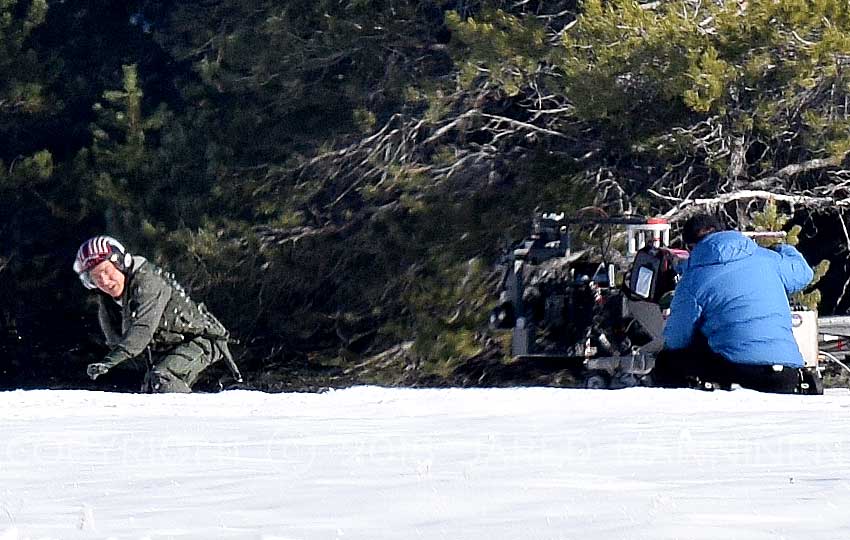 One unique aspect of Tahoe’s local history is that Lake Tahoe and the surrounding Sierra Nevada Mountains have provided the backdrop or centerpiece for countless Hollywood movies. In fact, during December of 2018, mega-star Tom Cruise was filming a pivotal winter action scene for Top Gun: Maverick aka Top Gun 2 in Washoe Meadows State Park. This relatively small state park is located in South Lake Tahoe, and happens to be in my (figurative) backyard. And, other than the production crew, I believe I’m the only person on the planet to have witnessed and captured images of Tom Cruise filming this brief but exciting winter action sequence.

This movie is the long-awaited sequel to the original hit action film Top Gun (1986), which essentially rocketed Tom Cruise into stardom.

The first official trailer for Top Gun: Maverick was released in July of 2019.

And then the second official trailer for Top Gun: Maverick was released in December of 2019.

And, I’m starting to think that the scene I captured in the following photos may be related one of the last scenes in the second trailer (2:03).

At that time, you can hear pilots yelling, “Smoke in the air!” and “Break Right!” This indicates, to me, that they’re probably under attack.

I’m starting to believe that the scene I captured in this article must be a major plot point.

Since it’s such a unique scene, it seems that the studio either omitted it from the trailer because it was cut from the movie or because it’s highly integral to the plot. I lean toward the later.

A behind-the-scenes trailer by Paramount Pictures highlighting the fact that all of the flying performed in Top Gun: Maverick was real. Very cool!

Tell me what you think in the comments below!

In December of 2018, Tom Cruise and the movie’s production crew filmed at two locations in South Lake Tahoe.

One location was the Lake Tahoe airport and the other was in Washoe Meadows State Park.

The bulk of the photos I present in this article were taken at the state park on December 11, 2018.

So, you can actually visit the exact same location of this scene from Top Gun: Maverick. See either of those articles for a map illustrating where this scene took place.

Please note that all of the images I photographed of Tom Cruise filming this scene for Top Gun: Maverick were done on public land.

And, I did not impede, distract, or otherwise interfere with the filming of this scene.

Also note that all of the images published in this article are Copyright © 2018 Jared Manninen. You may not use, share, or copy any of these images without my consent (Jared Manninen), and then only after I receive full payment from you.

According to flyers posted by the production company at homes located near Washoe Meadows State Park, filming was scheduled to take place in the park on Friday (12/7) and Monday (12/10).

Then, the production crew would spend Tuesday (12/11) and Wednesday (12/12) cleaning up and restoring the site.

The reality, however, was that they actually had to return on Tuesday to finish filming.

The weather conditions were too different between the Friday and Monday shoots.

The skies were dreary and overcast the previous Thursday (12/6) when the production crew began preparing the site.

The weather cleared up Friday afternoon.

When they returned on Monday to continue filming the winter scene for Top Gun: Maverick, the lighting and landscape had completely changed.

Now the skies were mostly clear and blue.

I spoke with a crew member on Monday (12/10). She confirmed that the conditions were so different that they were forced to film a third day.

The reason for this was so they could create plausible continuity between scenes.

For me, this altered filming schedule was fortuitous because I completely missed Friday’s shoot due to my job. And, I didn’t make it down to the state park the following Monday until later in the day.

Had the production company not come back to film on Tuesday, I would’ve never seen Tom Cruise.

Nor would I have ever captured these images of him filming this exciting winter scene for Top Gun: Maverick.

Maverick is Grounded (speculation on a winter action scene)

If I were a professional paparazzi or celebrity gossip reporter, I might insert a SPOILER alert here. However, I’m a nobody without any connection to the production of Top Gun: Maverick.

So, take my interpretation of the following featured Top Gun: Maverick winter scene with a grain of salt.

It shows Tom Cruise getting up from the snow-covered ground and running in the direction of the forest.

Although this scene is brief, I believe it has the potential to be a pivotal scene for the movie.

Click this paragraph for a GIF I created of Maverick getting up from the snow and running for his life after having to eject from his jet. I admit the quality of this GIF is a bit rough, but the sequence was created out of 50 photos I shot. I also happened to be laying on a sheet of ice in 25 degree (F) weather at the time and without a tripod. This was the third and final take of the scene of Tom Cruise running through the snow. It was also the most dynamic of the three attempts and I hope it’s the one that makes the final cut of the movie. © Jared Manninen

At its most basic level, Top Gun is about a gifted pilot (Maverick) who has the ability to fly and maneuver his jet in extraordinary ways.

Maverick is a total risk taker, hence his nickname.

And his demeanor and willingness to push the envelope is mirrored in his personal life.

Metaphors aside, Top Gun is ultimately an exciting movie about a fighter pilot flying jets.

But here we have that exceptional pilot grounded, literally. For reasons unknown, Maverick had to eject from his jet.

I believe he’s running from an enemy who shot down his jet.

Whether that enemy consisted of another fighter jet or a surface-to-air missile strike (or both), I couldn’t say.

But it definitely looks like he was attacked while flying versus experiencing a mechanical failure with his jet (causing him to eject).

My assumption is based on his reaction upon getting up.

At first he appears slightly disoriented. However, when he gains his bearings he stands up and tries to immediately run away.

Although, his parachute harness prevents him from getting far. So he takes a knee and releases himself from the harness.

Then he sprints across the snow as if he were running for his life.

Throughout the scene, he looks to be under duress.

Therefore, I believe there’s either a follow-up strike by a pursuing jet fighter or a ground component (perhaps on snowmobiles?) in hot pursuit of him.

I lean toward the latter based on the local casting call for extras (mentioned below).

The direction from which he’s running is an open meadow and the sun is overhead and to his back. He’s also dealing with at least knee-high snow. So he’s totally exposed and open to a follow-up attack by his pursuers.

For all intents and purposes, Maverick is dead in the water (snow!). That is, unless he can reach the forest and find some cover.

Talking with friends around Tahoe, I heard there was a casting call for local men willing to be extras in Top Gun: Maverick.

Apparently, the prerequisites for applying to be an extra were:

I heard about this casting call well after the fact. However, the beard thing would’ve eliminated me from the pool outright.

Although, I would’ve considered shaving if it would’ve meant going mano a mano with the Maverick himself.

I did find the clean-shaving criteria (if it was actually true) to be humorous. South Tahoe is a mountain town and we were in winter.

Another story I heard, after the fact, was that instead of filming the winter scene at Washoe Meadows State Park, a location scouting crew for Top Gun: Maverick had originally visited Tahoe Donner.

Specifically, the group was looking to film in the Euer Valley in Tahoe Donner Association, near Truckee, CA.

Why is this interesting (at least to me)? Because I work at Tahoe Donner Cross Country in the winter. And, one of my friends and former co-workers was the person who drove the scouting team around the property.

Access to the Euer Valley is along a narrow dirt road. Since filming was going to occur in December, the whole situation had the potential to turn into a shit sandwich.

Had they staged their gear down in the valley and had been hit with an epic snowstorm while filming, there would’ve been the chance that the equipment would’ve had to remain there until the spring.

So, my friend asked about airlifting the gear in and out of the valley via helicopter. They agreed it was possible. But once they started mentioning the low flying jets they’d be sending over the property, the deal was basically off.

Interestingly, jets never flew low over anywhere near Tahoe anyway. So, it seems they could’ve filmed at Tahoe Donner after all.

That would’ve been funny since their first day of filming in South Tahoe was the start of my work weekend at Tahoe Donner Cross Country. I may have seen some of the filming on Friday after all!

Last Piece of Gossip about Top Gun: Maverick being Filmed at Lake Tahoe

Another anecdote about Top Gun: Maverick being filmed at Lake Tahoe deals with scenes at the Lake Tahoe airport.

I’m an opportunist not a paparazzi. So, since Washoe Meadows State Park is just a street away from my home, that was convenient for me to visit.

On the other hand, I had no interest in trying to get pictures of Tom Cruise at the airport location.

The South Lake Tahoe City Council chambers are located at the airport.

So, I heard from locals who have business at the airport that signs were posted at the airport discouraging taking pictures or video during the days the production crew was onsite.

Along those lines, there was a fantastic rumor about taking unauthorized photos of the production. Basically, if you were caught, your recording device (whether that be a phone or camera) was confiscated immediately.

But then the production company would write you a check for $10,000 (?) to compensate you for your loss.

This sounds like bullshit to me but if it was true, it would’ve been a nice payout!

Lastly, if you’re ever driving through the town of Lone Pine, I highly recommend visiting the Lone Pine Film Museum. The museum is located on US 395, just east of Mount Whitney.

The museum was founded in 2006. It has information and movie memorabilia dating back to the first movies filmed in the Southern Sierra (circa 1920).

OK, the photos I took aren’t the best. I was 350 meters away and I only have a 300mm lens. However, they’re mine. So enjoy looking at my photos of Tom Cruise as he’s filming this winter action scene for Top Gun: Maverick, but don’t steal my shit. Just because it’s on the internet doesn’t mean it’s free.