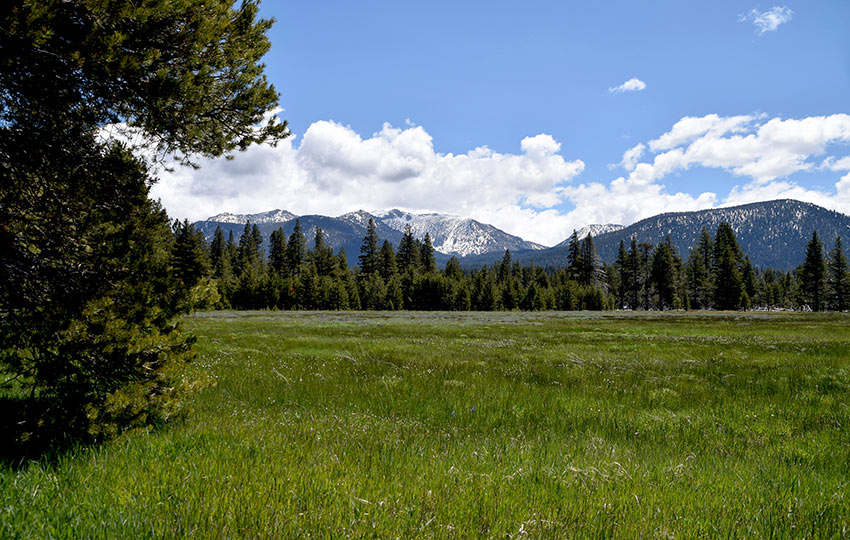 Hiking through the park is about as flat as it gets at Lake Tahoe, so this location is perfect for young children and elderly adults.

Just keep in mind that since it is a meadow, large sections of the park can be submerged underwater early in the spring and summer (based on the previous winter’s snowfall).

A fun fact about the park is that scenes for Top Gun 2: Maverick, starring Tom Cruise, were filmed in December 2018 near this route’s turnaround point (see map for the specific location).

Park at the Forest Service gate located on Lake Tahoe Blvd 2.5 miles west of the “Y” intersection of Highway 50 & State Route 89 in South Lake Tahoe. The gate is just beyond Tahoe Mountain Road and near the Lake Valley Fire District Station, and it’s set about 100 meters back from the road in the trees.

An optional entry point to the park is on Mountain Meadow Drive. However, I recommend just parking at the main gate on the north side of Washoe Meadows State Park since it’s never busy and the location enables you to hike the full three miles of trail to the derelict structure/turnaround point.

I only offer this secondary location and the alternate trails that form a loop (on the map) so as to alleviate any confusion when hiking if you happen to wander off the main trail.

Here’s a map to assist you in finding the parking area for accessing Washoe Meadows State Park. Remember, the hike featured on this post begins on the northern end of the park.

Begin your hike through Washoe Meadows State Park at the trailhead on Lake Tahoe Boulevard, between Tahoe Mountain Road and the Lake Valley Fire District Station.

This hiking trail is relatively straightforward compared to other similarly less traveled trails at Lake Tahoe.

It’s easy to follow and generally comprised of a hard-packed sandy walkway occasionally lined with granite rocks. Just stick to the main thoroughfare and you’ll easily make your way to the turnaround point while hiking alternatively in and out of meadows and forested areas.

Along the way you’ll be able to read a handful of interpretive signs, cross a couple of foot bridges, and hopefully spot a wide variety of Sierra Nevada wildflowers and birds.

I can’t emphasize enough, however, that this park is best saved for hiking during the heart of summer and fall.

There are some beautiful wooden bridges that will help to keep your feet dry. However, this park is a meadow and many of the lower portions of the trail can be completely submerged underwater during April, May, and even June. This all depends on how much snow Tahoe received the prior winter.

On this route, I have you arbitrarily turn around at the derelict wooden structure located 1.5 miles from the trailhead (set back in the trees). However, you could continue south exploring other sections of the park.

One example of an extended route through this park is to follow the same trail I feature on the Cross-Country Skiing at Washoe Meadows State Park blog.

The reason I recommend starting your adventure into Washoe Meadows State Park from the north is that the parking area on the north is about as “official” as you’re going to get. Every other access point around the park is located on a small side street in a residential neighborhood.

Essentially, you’ll be hard-pressed to find any real signs or indicators that you’re about to enter an actual California State Park. This just makes getting lost a lot easier. So, again, I say just embark on your journey from the north side to keep things simple.

When Lake Tahoe experiences a big snow winter, Washoe Meadows State Park is an excellent place to cross-country ski or snowshoe. It’s an ideal location for beginner cross-country skiers since the terrain is mostly flat.

Keep in mind that the snowpack definitely needs to be significant enough, because the park is located at lake level. This means that it’s at the lowest point in the Lake Tahoe Basin and is slow to accumulate snow.

Read the aforementioned article for more specific information regarding cross-country skiing and snowshoeing through the park.

A footnote about Washoe Meadows State Park is that filming for Top Gun: Maverick occurred in the park December 7-11, 2018.

Tom Cruise was onsite and filming scenes for the long-anticipated sequel to the 1986 blockbuster, Top Gun. See the map above for the specific location in which the movie was being filmed.

Follow this link to an article I wrote about the experience, as well as over 20 photos I took of Tom Cruise.

For those of you who are interested, here is a poster available for purchase that I designed featuring an image taken in Washoe Meadows State Park on January 25, 2017. Click on the image of the poster to go see all of the types of prints available at my RedBubble. Thanks for your support!

Do you have other insight, feedback, or trail updates about hiking Washoe Meadows State Park?

Mystery revealed. I've been checking in on this wi