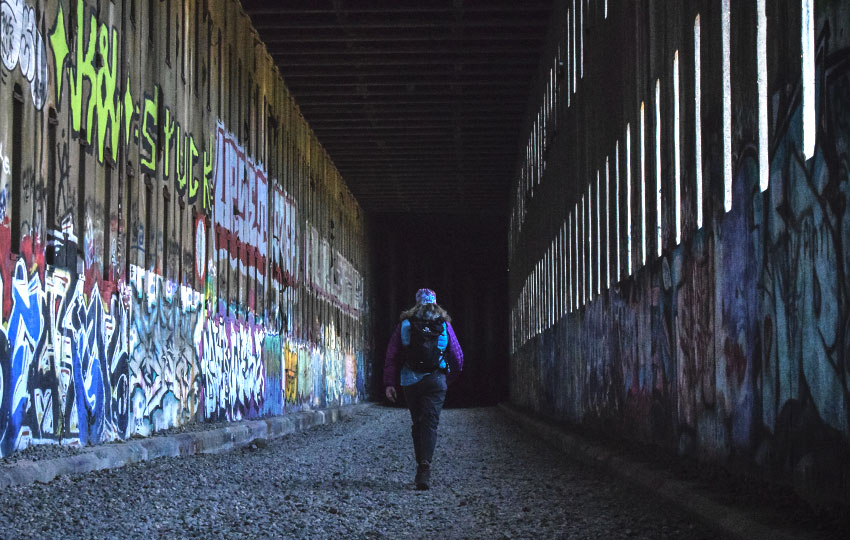 The railroad tunnels on Donner Pass provide, unquestionably, one of the most unique hiking experiences at Lake Tahoe. The Donner Pass train tunnels are fun for the whole family, particularly younger kids who find playing in the dark thrilling. But with that darkness comes the inherent risk of tripping and falling. So, bring with you a flashlight or headlamp to assist you on your journey. That said, the tunnel system on Donner Pass is a series of disconnected tunnels.

Also note that some of the tunnels feature various openings that allow light to filter inside the tunnel. So, you won’t be in total darkness during the entire hike (assuming you hike during the day!).

Hiking the Donner Pass train tunnels in the summer or fall months is ideal. During these months you’re less likely to encounter snow, ice, or standing water (from the previous winter) within the tunnels.

Lastly, the historic train tunnels form a makeshift art gallery for many graffiti artists. Regardless of your thoughts about graffiti, at this point in history the graffiti has become a mainstay. And, in fact, many people visit the tunnels specifically to see the graffiti.

Scroll to the bottom of the page for a brief historical overview of the Donner Pass tunnels and the graffiti that fills the tunnels.

Parking for the Donner Pass Tunnels:

1) Entrance to Tunnel #6. I prefer to start at the west entrance of Tunnel #6 since it’s as much of a beginning as you’re going to get from a hike. And, it ensures that you’ll hike through Tunnel #6, which is quite unique (see a brief description of Tunnel #6 below).

There are no official signs to the train tunnels, but there’s a small dirt lot a few hundred meters from Donner Pass Road (at the beginning of Tunnel # 6.) The spot should be obvious since you’ll be able to see the tunnel (i.e. gaping hole) directly beneath Sugar Bowl Road.

Park in the lot and begin your hike through the Donner Pass Tunnels!

***Please note that this dirt parking area on the west side of Tunnel #6 is technically located on private property. The use of this parking area is either available due to a public easement or simply a laissez faire attitude by the property owners. I’ve asked friends who are members of the Donner Summit Historical Society, and have been told that they’ve reached out to the owners various times over the years to confirm whether or not they could use the lot (parking for their guided hikes). However, they’ve never received any response.

Park at your own risk in this dirt lot, but know that I’ve never heard of anyone being ticketed while parking there.

Here’s a map to help you find the dirt parking lot at the entrance of Tunnel #6.

2) Down the hill from Tunnel #6 on Donner Pass Road near the China Wall Marker. Park just off of Donner Pass Road at the dirt pullout near the China Wall Marker. This parking location is the most obvious to people who don’t live in the area. However, it does require a short hike up from the parking area which includes a little bit of scrambling up rocks. Although it’s not a difficult climb (to me), I would be hesitant to recommend this section for elderly people.

Please note that this parking area has limited space in which to park, so arrive early in the day for your hike. And, again, remember that you’ll have a short hike uphill to the train tunnels. Once you reach the train tunnel route, you’ll be in-between Tunnel #6 (to the west) and Tunnel #7 (to the east). Be sure to explore Tunnel #6 even though you’ll have to backtrack out of it.

Here’s a map to help you find the pullout along Donner Pass Road near the China Wall Marker.

There are numerous tunnels at Donner Pass. However, I recommend that you begin your hike of the Truckee Tunnels through Tunnel #6 regardless of where you park.

Tunnel #6 is the most unique and the longest (1,660 feet) of all the historic tunnels. The reason Tunnel #6 is interesting is because, at first, the Chinese only made about two feet per day of progress as they drilled from the west. Another team began to drill from the east. But this second team also had a difficult time drilling through the granite, so two more teams drilled from the top. In the end, the four teams reached within six inches of each other. And, it took over a year and a half to complete.

Most people generally begin at Tunnel #6 and just hike through the first few tunnels since the tunnels are disconnected and spread out.

If you’re taking your time to look at the graffiti on the walls and being mindful of your steps, just hiking through those first few tunnels can take some time. Keep in mind that you naturally walk slower in the dark.

But if you have the time, I recommend hiking the full two miles of historic tunnels.

Once you get past the first couple of tunnels you’ll see very few people. And, at the end of the two miles, there’s usually a longer mural section of graffiti in which to admire. See the photo gallery below for a relatively extensive collection of graffiti art at the very end of the historic tunnels. That specific section is often sunlit and provides easy veiwing.

The historic train tunnels are disconnected, so there are multiple open-air sections between them. And, each tunnel is of a different length.

During those breaks in the tunnels are where you’ll find a number of extended views. The most prominent views are of Donner Lake.

Look across the region and imagine being an emigrant in the late 1840s and into the 1850s. Then, imagine traveling across the pass before there was a railroad. To negotiate the granite pass with your family and all of your belongings in ox-drawn wagon(s), you would’ve had to be creative and ambitious.

There are a couple of different routes from which to choose, but none were easy. In fact, some of the routes emigrants took to overcome Donner Pass required them to completely disassemble their wagons and haul everything up the mountain piecemeal.

Or, imagine working on the tunnels year-round like the roughly 12,000 Chinese emigrants did in the mid to late-1860s.

Lastly, I like to hike just beyond the last historic tunnel as indicated on the map. At 2.5 miles, you’re out of the tunnels and at a good place to turn around.

Many people call Donner Pass the most historic square mile, meter, or foot (whichever you prefer!) in California. Some people consider it to be the most historical location in all the Western United States. No matter how you look at it, historically, Donner Pass has been the most traveled pass through the Sierra Nevada.

Donner Pass claims many “firsts,” to include:

And then there’s the fact that indigenous people have used the pass for thousands of years, long before any of the aforementioned “firsts.”

With regard to the hike through the “Truckee tunnels,” Donner Pass was essentially the crux of the transcontinental railroad. Theodore Judah, the architect of the railroad, proposed a tunnel system to address the threat of avalanches and snow blockages. So, the tunnels (aka snow sheds) acted as a physical barrier to keep snow from accumulating on the tracks.

But the tunnels wouldn’t build themselves.

By the end of the Gold Rush, thousands of Chinese immigrants were out of work. But, they were experienced miners. This was because they just came from working in the western gold and silver mines of the 1850s. This made them ideal candidates for working on the railroad. So, they signed on to build the tunnels and lay the railroad, particularly along Donner Pass. CA State Parks estimates that upwards of 12,000 (or possibly even a few thousand more) Chinese men worked on the railroad from 1863-1869.

The story of the Chinese railroad workers is one of hope, despair, acceptance, and discrimination. It’s an amazing story that should be told on its own, not just as the bland footnote that I present here. But, I didn’t want to turn this article about actually hiking through the tunnels into a full-blown history lesson. Therefore, I’m simply mentioning this part of history since the whole reason for hiking the Donner Pass tunnels is the actual tunnels.

And, I believe that it’s important to understand a little about their history because those tunnels were built by a large force of underpaid and underappreciated Chinese immigrants.

Thoughts about Graffiti at the Donner Pass Train Tunnels

It’s unavoidable that you’re going to see graffiti in the tunnels at this point. In fact, for many people the graffiti is the main attraction or highlight of the hike.

I loathe “tagging” that’s common to gangs to mark their territory. Mostly, I find graffiti to be a blight on the landscape, whether it be urban or otherwise. I don’t even like seeing painted rocks (with phrases like “love” and “peace”) placed in the forest. As far as I’m concerned, it’s all just litter because nature doesn’t need any help from humans to make it look more beautiful.

On the other hand, the thought-provoking works of Banksy is legendary.

All of that said, the tunnel art isn’t going anywhere. Periodically volunteers paint the walls, but graffiti artists always come back to add new work. So, don’t expect to see the graffiti that I’ve included in this article.

I’ve grown to appreciate the tunnel art at the Donner Pass Tunnels because some of it as actually nice to look at and the location is reminiscent of an art museum. I’m also grateful that most of the graffiti is contained within the tunnels and that the tunnels are dark, after all.

Do you have other insight, feedback, or trail updates about hiking the historic Donner Pass train tunnels?