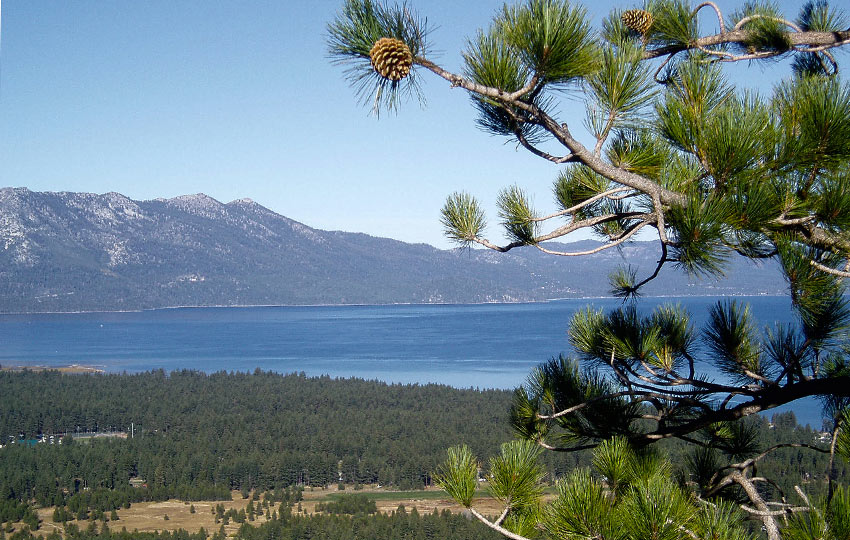 Although Jeffrey Pine (Pinus jeffreyi) trees are the most common trees found in the Lake Tahoe Basin, that fact doesn’t diminish their regal beauty and dignified stature. One reason for their abundance is their resilient nature in the face of adversity.

These coniferous evergreens can live for 400-500 years and are tolerant of many stressors such as drought, fire, poor soil, altitude, heavy snow loads, and shifts in temperature from one end of the spectrum to the other.

Of all the trees, Jeffrey Pines exemplify best the hearty soul required to thrive in Lake Tahoe’s arduous landscape and climate.

For people who come to Lake Tahoe for the first time, it’s hard not to marvel at the size, volume, and ramrod straight appearance of Jeffrey Pine trees, not to mention their massive pine cones.

I felt the same way when I moved to Lake Tahoe in 2005. Having grown up in the upper Midwest, I had been surrounded by dense forests for much of my life. However, I recall very few of those forests consisting of such large trees, let alone ones that yielded pine cones bigger than softballs.

I quickly learned that these trees were called “Jeffrey Pines.”

Much later I learned that Jeffrey Pines were named after the Scottish botanist John Jeffrey (1826-1854?). He was on assignment by the Royal Botanic Garden Edinburgh (RBGE) to find exotic species of North America trees. In 1852, he collected samples of the pine tree (near Mount Shasta) and sent them back to the RBGE.

There is no evidence of his whereabouts or what lead to his demise, so it’s pure speculation on my part, but I find it interesting that he was in the same region of California during the Gold Rush. Who knows, perhaps he stumbled upon the claim of some overly protective gold miners…

The average elevation range in the Sierra Nevada Mountains for Jeffrey Pines to grow is between 6,000-9,000 feet. However, the trees can grow at 5,000 feet, as well as up to elevations of 9,500 feet, depending on the conditions.

Jeffrey Pines are found in a greater abundance and at higher elevations on the eastern side of the Sierra Nevada Mountains.

Mature Jeffrey Pines can grow to heights of 170 feet or more, although the typical range is closer to 80-130 feet. In general, Jeffrey Pines range in girth from 4-7 feet.

The reason Jeffrey Pines self-prune their lower branches as they grow taller is to decrease the ability for fire to “climb” the tree. Incidentally, this also means your kids will have a tough time climbing a Jeffrey Pine!

Lastly, some Jeffrey Pines can exhibit a Krummholz (German for “crooked wood”) form or shape due to exposure. High winds and icy conditions, as is found in higher elevations, trim away bits and pieces of the tree and can cause it to grown in a twisted manner.

The needles of Jeffrey Pine trees are bundled into groups of three.

The needles are usually between 7-11 inches in length, quite stiff, and formed into tufts extending from (and well beyond) the terminal bud of each branch.

The characteristics of these pine needles provide the tree with another layer of fire protection because the tufts prevent embers from reaching (and damaging) the actual buds.

On the other hand, during the winter these tufts make for great collectors of snow and provide fantastic imagery of snow flocked trees.

The cones of Jeffrey Pines are shaped similar to a beehive and can be up to eight inches long.

The prickles on the outside of the cones curve slightly inward giving rise to the phrase “gentle Jeffrey,” with regard to picking up and holding a cone.

The widest portion of the cone is actually the top, as this is how they naturally hang from the end of the branches. The female cones, which are the big and woody looking cones, can drop any time throughout the year depending on conditions (high winds, drought, and tree damage).

Be particularly careful when parking beneath Jeffrey Pines when their cones are still green and full of sap. If they fall, they have the potential to break windshields and leave significant dents on your vehicle.

The color and pattern of Jeffrey Pine bark can vary to a degree, but generally it is reddish-brown, has deep grooves or furrows, and appears puzzle-like in shape.

On warm days when the bark has been exposed to the sun, the scent of Jeffrey Pine bark is reminiscent of vanilla or butterscotch.

Because the bark of a Jeffrey Pine is so thick, it acts as insulation against fire. So, even though the outside of a Jeffrey Pine might be scorched black from a fire, the inner structure still has a good chance of surviving.

As robust as Jeffery Pine trees are, they aren’t impervious to disease. In the Lake Tahoe Basin, it’s not uncommon to find a Jeffrey Pine that’s either been infected with Western Gall Rust or Dwarf Mistletoe.

One of the Jeffrey Pines on the property of my first home was infected with Western Gall Rust and had to be permanently removed. This disease appears as a “hip canker” near the base of the tree. It’s a fungus that creates a weak point on the tree by eating away its outer trunk.

At my second home, I found Dwarf Mistletoe on a Jeffrey Pine. This disease is a parasite that weakens (and can kill) a tree by robbing from the tree vital nutrients. Both diseases can spread to other pine trees.

In spite of the many defenses a Jeffrey Pine has to fend of fires, it will still succumb to it under the right circumstances.

In 2007, a major fire ravaged the area just west of Meyers (which is west of South Lake Tahoe) along Angora Ridge and over to Tahoe Mountain. Most likely the fire began as a result of someone not properly extinguishing their illegal campfire at a place called Seneca Pond.

The Angora Fire lasted approximately a week and claimed over 250 homes and 75 additional structures, not to mention countless trees, birds, and four-legged critters.

Many of the lost trees were Jeffrey Pines, but even their charred husks can make for a new home.

Order my “blueprint” infographic about Jeffrey Pine trees at my RedBubble account. Makes for a great poster!

Despite the clouds in this shot (for dramatic effe

Another beautiful bird of prey at Lake Tahoe 🤗

So weird to involuntarily put your life on hold fo

Got to go home this weekend after 13 days of manda