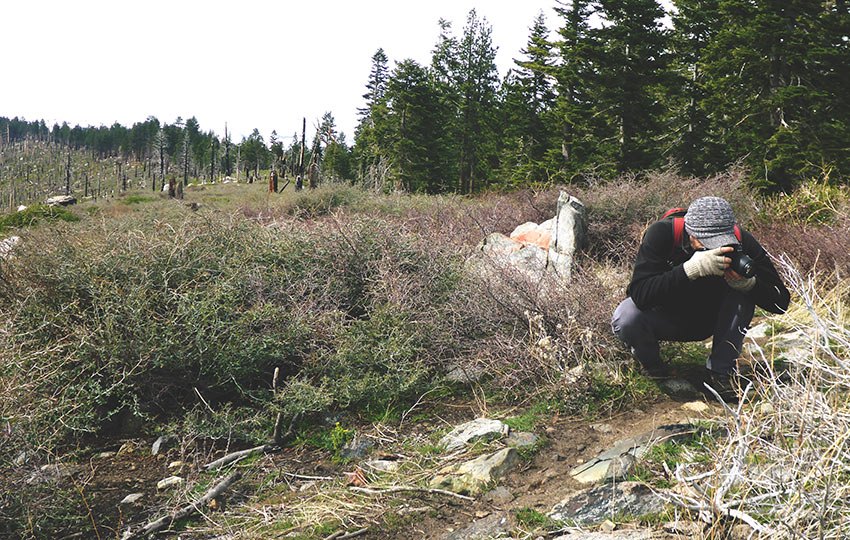 I always stop to appreciate Sierra Nevada wildflowers while hiking. However, my love of specifically hunting for them comes and goes like the seasons. For example, during some years I’m active in my search for the small treasures. In other years, however, I’m more interested in logging bird species or hiking miles.

But one of those active years of searching for wildflowers was in 2015. At the time, I was hiking a series of short trails near my home in South Lake Tahoe. My goal was to gather trail data and reference photos for a future project (which essentially became this website!).

That spring was preceded by a low snow winter and many drought years. So, even though there was still snow higher in the mountains, by March I was hiking on dry trails at 7,500 feet.

On March 6, 2015, I hiked to Tahoe Mountain and found my first wildflower of the season. Or, so I thought! It seemed very odd that I would find something blooming so early because it was, after all, barely the first week of March. Drought or not, though, that’s exceptionally early for wildflowers to be blooming at Lake Tahoe.

But there it was growing out of the rocky soil near the top of Tahoe Mountain. The flower petals were lemon yellow in color and its stem was covered with dark green and purple leaves.

The curious thing about this “wildflower” was that except for the change in color, the leaves on the stem and the petals of the flower were identical. Realistically, it looked like someone had just spray-painted the tops of this leafy plant yellow and called it a flower.

I took some photos and went home to research the plant. No luck. I posted pictures on social media in hopes that one of my friends more savvy in the identification of Sierra Nevada wildflowers could help me out. But still no luck.

Ten days later I was hiking along Angora Ridge, which is a close neighbor to Tahoe Mountain, and I found more of those mystery flowers. A lot more!

This time, however, the flowers didn’t appear to be in full bloom as they were still lime green in color. My assumption was that the whole plant started out as a uniform color of green. Then, as it matured, the contrast between stem (leaves) and flower (petals) would become more pronounced like the flower I found on Tahoe Mountain.

In spite of discovering this new evidence, neither I nor any of my friends could determine what it was that I had actually found. There were so many examples of the plant on Angora Ridge. Yet, I couldn’t find a single image of it in any reference book relevant to Sierra Nevada wildflowers.

Two months passed before curiosity finally got the best of me.

On May 3rd I returned to Tahoe Mountain to see what became of the flower in question. To my surprise, nothing remained of its existence. Three days after that, I went back to Angora Ridge in search of evidence of that mystery flower mother lode.

This time, however, I found remnants of the unidentified flower. And I not only found remains of those mystery flowers, but I also found a new (to me) wildflower sprouting from one of the dying bunches.

It was confusing to look at due to the jumbled mess of bloom and decay. However, once I traced the stem from the head of the new flower down to its base it was clear that one sprouted from the other. So, I took more photos and renewed my investigation.

What I ultimately discovered was both intriguing and creepy. Of the two varieties of flowers, only the second of them (the one that was sprouting from the other) was an actual Sierra Nevada wildflower. It was a type of Rockcress and, not surprising, grows in dry rocky areas.

The flower at the root of this mystery was not actually a flower at all. Rather, it was a parasitic rust fungus called Mustard Flower Rust (Puccinia monoica). That strain of rust fungus likes Arabis plants which are within the mustard family (Brassicacea). Rockcress is part of that family.

In early spring, Mustard Flower Rust takes over a host plant inhibiting it from procreating. And then it manufactures yellow pseudo-flowers in place of the plant’s true flowers.

The fungus uses these fake flowers to attract bees and insects. But the pseudo-flowers don’t just look like real flowers to the naked eye. They’re also ultraviolet and they emit a scent.

Combined, all three features provide a compelling argument that attracts bees and insects. As a result, the bees and insects spread the rust fungus instead of pollinating the host flowers. In this case, it was the Rockcress.

At some point during my recollection of this experience (and subsequent note taking sessions for this blog), I sat in on an episode of the older television series Stargate SG-1. My roommate had been revisiting the series, and the episode featured a courtroom trial of all things. Basically, two factions were arguing for their respective comrades’ right to life.

The reason this episode caught my attention was because the two entities at the center of this case inhabited the same body. The parasitic entity called the Goa’uld (pronounced as it’s written) invades a host person.

The Goa’uld are a fictional race of worm-like creatures that fix themselves to a host’s brain and spinal cord and then take control of the host. They invade other beings because their worm-like bodies are bound to water. By taking over a host body, they’re able to travel beyond their natural habitat.

Interestingly, the host does not actually die for if it did the parasite would have to find a new host. In the case of the trial, the Goa’uld’s position was that the host was still actually alive and both were simply sharing the same body.

However, the opposition (good guys) argued that just because the host was alive didn’t mean that he was living. Essentially, the host no longer had free will and became a prisoner trapped in his own body.

Clearly, drawing a parallel between a parasitic rust fungus attacking Sierra Nevada wildflowers and a fictional race of alien parasites that take over other forms of life is a stretch. As an artist, however, I’m fascinated when art imitates life and vice versa.

I also like to find connections between seemingly unrelated things or concepts. So, even though many people site passion as the big motivator behind leading a fulfilling life, I would argue that passion stems from curiosity.

And, that curiosity is the true source of fulfillment.

Curiosity returns us to a beginner’s mind and causes us to ask why, what, when, where, and who?

So get outside and do your thing, but be sure to stop every once in a while to appreciate what the world around you has to offer. You may just discover a mystery that leads you down a new path!

I’ve embraced documenting Mustard Rust Flower as a pet project ever since I learned about it. So whenever I come across it while hiking, I photograph it and post the observation on iNaturalist. Honestly, though, I don’t post every single specimen that I find. Sometimes they grow in sprawling patches. In those cases, I’ll post one observation and include multiple photos. Other times I’ll find isolated incidents of them and post those unique observations.

Question of Intention aka Conclusion

So, why is it important to know about this Mustard Flower Rust, especially since it has such a short lifespan and only effects a limited number of wildflowers in the Tahoe Basin? Well, you got me there.

If we’re going down that path I guess the broader and more relevant question to ask is, “Why is learning anything about nature important?”

I write these natural history articles to share with you entertaining and educational material that’ll enhance your outdoor experience. These works won’t transform you into world-famous botanists, for example. Their scope is relatively limited, all things considered. But they do provide a starting point for your own research. It’s my hope that after answering some basic questions about this creepy parasitic rust fungus (Puccinia monoica), for example, that you’d continue to ask questions.

As much as I’d love to be able to answer all of those questions, that would entail writing an entire book. And that’s not really what I’m trying to accomplish here.

The Lake Tahoe Basin Management Unit is the division of the US Forest Service that manages the wildlands immediately surrounding Lake Tahoe. Visit their website because it provides information about Tahoe-related outdoor activities. But if they don’t have the answer they’re great about pointing you in the right direction.

I also recommend checking with the Tahoe Rim Trail Association. In addition to classes and information regarding hiking and backpacking at Tahoe, they often offer wildflower-specific hikes.

After that, I would look at some of the Tahoe news and information websites such as:

Those sites usually feature some sort of wildflower-related articles at the beginning of each summer.

I highly recommend The Laws Field Guide to the Sierra Nevada. Although it doesn’t include every Sierra Nevada species, it addresses everything from wildflowers to cloud formations.

The following isn’t comprehensive regarding identifying Sierra Nevada wildflowers. But even owning some of these books will help you greatly.

The following articles feature information, history, and stories about the various forms of plant life that you can find at Lake Tahoe. In addition to discussing native wildflowers, these articles cover trees, bushes, and most other forms of Sierra Nevada plant life.

Trees of the Sierra Nevada