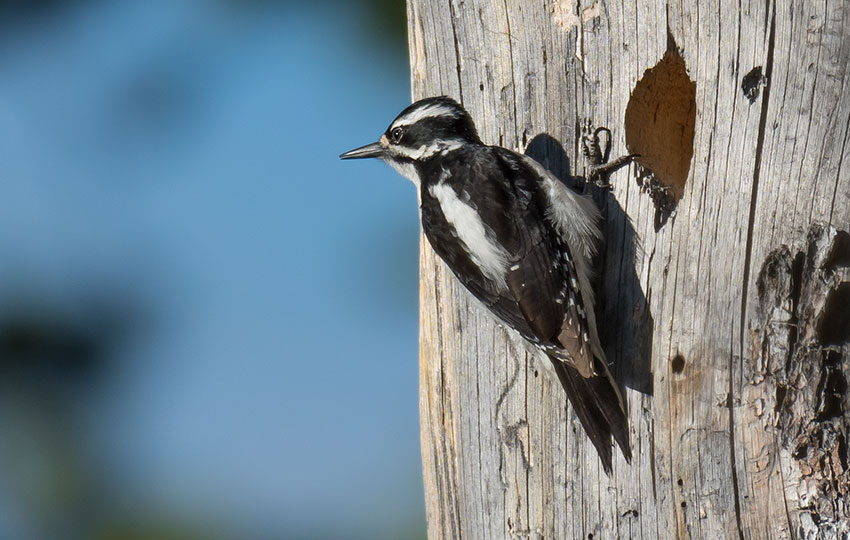 For many people, woodpeckers conjure up imagery ranging from the annoying. Those pesky birds that perforate the sides of homes new and old. To the absurd. Woody Woodpecker up to his usual hijinks. To the industrious. Woodpeckers are considered by many as the lumberjacks of the bird world, after all.

There’s no question that they can be all of those things.

During the spring of 2020, near my home in South Lake Tahoe, a White-headed Woodpecker turned one of the walls of my neighbor’s second home into Swiss cheese.

I’ve watched a Pileated Woodpecker rear back its head while belting out a maniacal laugh. This just before flying off as if it were a physical incarnation of the cartoon character.

And, countless species have claimed the vacant tree cavities created by woodpeckers as their home.

Based on the aforementioned examples, it probably seems like woodpeckers are easy to label or characterize. However, their natural tendencies and actions are quite profound. And, they contribute to the overall health of forests.

I wrote this article for my 2020 California Naturalist Certification Course capstone project. I’ve since edited and expanded the text. Additionally, I separated it into two articles. This is the first article, an overview of woodpeckers and how they contribute to healthy forests. The second article provides an overview of the 12 woodpecker species of the Lake Tahoe Basin.

The following video is my capstone project with the original elements intact.

3 Roles that Woodpeckers Play in Maintaining a Healthy Forest

The three primary ways in which woodpeckers help to maintain healthy forests are:

1) Woodpeckers Provide Nesting Cavities for Many Species of Wildlife

Woodpeckers are primary cavity nesters. This means they excavate from scratch new homes in which to live. This is a critical service to the local fauna population.

Many species of birds and other wildlife are considered secondary nesters. They take up residence in the cavities left by woodpeckers.

“About forty of the sixty other cavity nesting birds in North America nest in the abandoned homes of woodpeckers.”

Keep in mind that woodpeckers aren’t just building homes for other critters because they’re generous. Most cavities left behind are simply the result of woodpeckers foraging for their next meal.

There’s a variety of woodpeckers at Lake Tahoe. So, there’s an abundance of various sized tree cavities in which to support many species.

One thing I find interesting is that woodpeckers don’t just chisel their nests from the outside. Once they’ve burrowed far enough into a tree, they continue their operation from inside.

Remember that White-headed Woodpecker that built itself a home inside my neighbor’s wall? I’ve heard it spend hours pecking away from the inside of the house’s wall.

I’ve also heard a Hairy Woodpecker drilling from the inside of an old branch-less, yet still upright, snag.

In both cases, I spent quite a long time trying to pinpoint the location of the woodpecker. The challenge came from the sound being so muffled and indirect.

2) Woodpeckers are a Check on the Insect Population

Much of a bird’s day involves searching for food. Woodpeckers are no different in this respect. It’s estimated that woodpeckers can consume thousands of insects a day. Also, the way in which woodpeckers seek food yields benefits to other species.

Some woodpeckers prefer to work on live trees. Others gravitate toward dead ones due to the high concentration of insects that reside within them.

Regardless, when woodpeckers hammer away at a tree it’s usually because they’re searching for food such as larvae and wood-boring insects.

For example, you may find a Pileated Woodpecker chiseling away at a rotten log on the forest floor in search of Carpenter Ants (one of their favorite foods).

As I previously mentioned, the cavities left behind by woodpeckers provide homes for other wildlife. And many of the species who inhabit those cavities also happen to be insectivores. Additionally, the exposed sections of the trees a woodpecker excavates provide access for other insectivores to probe for food.

Red-breasted Sapsuckers, for example, will systematically peck at live trees. They do this in order to cause them to yield sap. They’ll then leave the site while the sap begins to collect. During that time, other wildlife will consume the fresh sap along with insects that become trapped in it. When the sapsuckers return, they’ll continue to feed on the flowing sap and the trapped insects.

Without woodpeckers and other insectivores, the world would most likely be overrun by the insect population.

Half of a tree’s worth with regard to forest health comes with its death. For example, all of the nutrients it gives back to the earth. So, we can thank woodpeckers for accelerating its rate of decomposition.

The insects for which a woodpecker searches definitely contribute to the breakdown of trees.

However, it’s at a very slow rate. But the violent mechanical action of a woodpecker chipping, chiseling, and hammering away at a tree is quite rapid. And, the demolition process sends fragments of the tree flying in all directions. This helps to disperse the nutrients in which that dying tree provides across the forest floor.

Woodpeckers are a unique breed of bird and worthy of continued study. So, as I learn more about them, I’ll continue to add to this list relevant information.

Woodpeckers use drumming as a means of communication instead of traditional birdsong.

The rapid-fire drumming is probably the sound most associated with woodpeckers. And it’s a method by which woodpeckers establish their territory and attract a mate.

Drumming is not actually considered damaging to a tree, however. It’s accomplished using less force. Probably more akin to a boxer’s jab than a big right cross.

Watch the video clip of the White-headed Woodpecker at the beginning of my capstone project. To me, it sounds like it’s having a conversation with another woodpecker in the distance. There’s a mating couple of White-headed Woodpeckers in the same location in which I recorded this woodpecker drumming. So, I believe the two of them are simply having a conversation while they’re getting ready for the day.

Woodpeckers have been a point of interest for scientists who study the effects of brain trauma. In particular, many have studied them with regard to impacts to the head. Research has discovered that:

Woodpeckers have exceptionally strong toes in which to cling to the sides of trees, but only in an upright position.

Woodpeckers don’t have the correct anatomy to climb down trees face forward like Nuthatches, for example. Instead, they hop and walk backwards down trees.

The tail feathers of woodpeckers are stiff so they can use them as a prop or kickstand. In combination with their strong toes, woodpeckers position their bodies away from the tree during excavation. This provides them leverage while working and keeps their bodies off of the tree. The last part is important because it prevents them from experiencing the vibrations (through the tree) that they’re creating.

Generally, woodpeckers prefer an open forest that lacks a robust understory so that they can work while maintaining a watchful eye for predators.

To be clear, I’m not an ornithologist so I’m sure there are many details about woodpeckers I’ve left out. There are most likely some minor inaccuracies in this article as well. Just know that I produced this project in good faith and to the best of my current abilities and knowledge.

I’m constantly updating articles on Tahoe Trail Guide in an effort to keep them as accurate and up-to-date as possible. So, post any feedback or corrections in the comment section below.

People often ask me about recommendations for resources regarding Lake Tahoe birds. The following is a list of books, websites, and other resources that I refer to when identifying and researching the birds of Lake Tahoe.

Some of these resources are more specific than others regarding birds of Lake Tahoe. However, each resource has helped me in more ways than one. For example, Sibley’s Birding Basics actually uses as one of its specific examples a comparison of a Downy and Hairy Woodpecker. Even though the two woodpeckers are not the primary subject of the book, the analysis was helpful to me because I’ve spotted both woodpeckers at Lake Tahoe.

Please note that this list is in no particular order and that I’ll continue to add relevant resources to it.

Whenever you’re at Lake Tahoe and take photographs of the birds you see,

I’d love to see what you’re finding out there 🙂

6 thoughts on “Birds of Lake Tahoe: How Woodpeckers Contribute to Healthy Forests at Lake Tahoe (and other fun facts)”