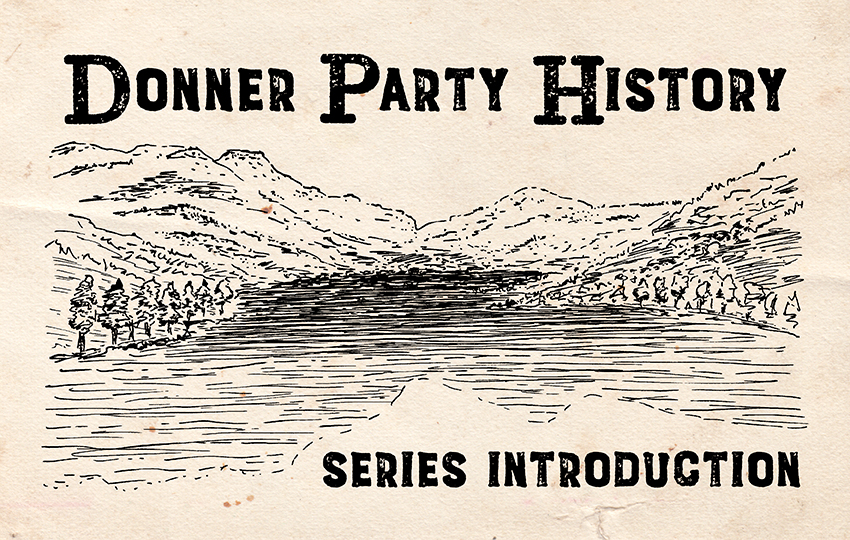 Lake Tahoe is a relatively small and finite location. However, it’s a nexus for so many large events and personalities. This is why I’ve been so fascinated by its history ever since moving to Tahoe in 2005. So in addition to exploring Tahoe’s incredible summer and winter trails and learning about the region’s flora and fauna, I spend a fair amount of time learning about Lake Tahoe’s history.

For the past couple of years, I’ve volunteered with the Donner Summit Historical Society. Under their mentorship, I’ve been the guide for the Roller Pass/Judah loop hike during their annual fall fundraising event. Additionally, I worked with a fellow Tahoe writer many years ago on a series of Tahoe History comics. These small booklets featured my artwork along entry-point history about Lake Tahoe. Although that project was short-lived, I still have designs to resurrect it!

In the meantime, I’ve focused on learning some specific topics about Lake Tahoe that I find compelling. That’s really the only way to do it, in my opinion. Everything about Tahoe, to one degree or another, is connected. Where one story begins, another immediately follows. Or, where one historical figure lands another crosses their path soon thereafter. The elaborate tapestry that forms Lake Tahoe’s history is overwhelming if you try to learn it all at once. So, I recommend that you just find what’s most interesting to you and start from there.

In my case, the Tahoe-related historical event that really grabbed ahold of me is the dramatic story of the Donner Party. It’s an enthralling story filled with heroes and villains, ambition and mishap, and hardship and perseverance.

One of the core elements to the Donner Party story is the elements themselves, namely winter. In fact, winter is essentially the only reason that we even know the Donner name. According to Ethan Rarick (author of Desperate Passage: The Donner Party’s Perilous Journey West), “If snow didn’t hit until mid-November or late November of 1846, we would’ve never heard about the Donner Party.”

There’s no doubt that the winter the Donner Party faced in 1846-1847 was extreme. The snow fell early, and the storms were relentless throughout the season. However, that winter was, in many ways, par for the course for the Sierra Nevada.

I say this is because the snow in the Sierra Nevada Mountains is usually plentiful. For example, until a few years ago the approximate average snowfall at Donner Summit was 34 feet. On the other hand, snow in the Sierra is often unpredictable. Consider the 2021-2022 winter at Lake Tahoe. Donner Summit received over 16 feet of snow during the month of December alone! Then, it faced a drought during the following months of January, February, and March.

The unpredictability of Sierra Nevada winters was the reason why western emigrants of the 1800s (en route to California) hustled along the overland trail from the get-go. Donner Pass (and the Sierra Nevada in general) was the last major hurdle on their 2,000+ mile journey. And by the time they reached the Sierra Nevada, their resources and energy were nearly at an end.

So, combine some harsh winter conditions with mountain travel and you have the makings for an engaging story of survival!

If you’re familiar with Tahoe Trail Guide and my YouTube channel, you’ll know that I not only love being in the mountains but I love being in them during the winter. I also like tales of people overcoming extraordinary circumstances. And, for whatever reason, I like stories filled with dread. So, Donner Party history captures my interest on multiple levels.

I hope it’ll capture yours as well.

As I previously mentioned, Lake Tahoe’s history is very intricate. Therefore, telling the story of the Donner Party in an isolated fashion or simply as some sort of historical snapshot would be doing you a disservice. When and where appropriate, I’ll publish additional information and articles to provide greater context.

Honestly, though, I plan on writing many historical articles relevant to Lake Tahoe that aren’t directly related to the Donner Party. In my opinion, that won’t make any of them any less interesting. And I hope you agree.

I’m not a professional historian. So, if you find an error in my work please comment on the relevant article so that I can make the appropriate correction(s). That said, I tend to be conservative when relaying historical information. If I’ve left out some unique detail of an event or situation it may be for a couple of reasons. The first being that I’m simply not aware of the detail. Or, perhaps I’ve heard it but don’t believe I’m enough of an authority on the subject to include it in my work.

Along that line of not being a professional historian, I don’t include specific citations within each article. I provide a list of resources from which I’ve used to write these articles. However, I prefer to include within the body of the text clarifiers such as “according to so-and-so” or “such-and-such book…” as this style of writing makes for much more streamlined reading.

If omitting traditional citations undercuts my work in some peoples’ minds, so be it.

I always strive to be as factually accurate as possible, but these are entry-point history stories not academic works. That said, ask me (via the article’s comment section) if there’s information that sticks out to you and you want clarification or to know its specific source.

Lastly, I’ll be using my own illustrations for this Donner Party History series. Basically, I want flexibility in the imagery that I present, a uniformity to the presentation, and I don’t want to have to deal with copyright/credit concerns. So these articles will look different compared to traditional history-based articles that often use various historical photos.

This is the chapter list of the Donner Party History articles that I plan to write. The chapters lacking a link to their article are the chapters I have yet to write. So, stay tuned!