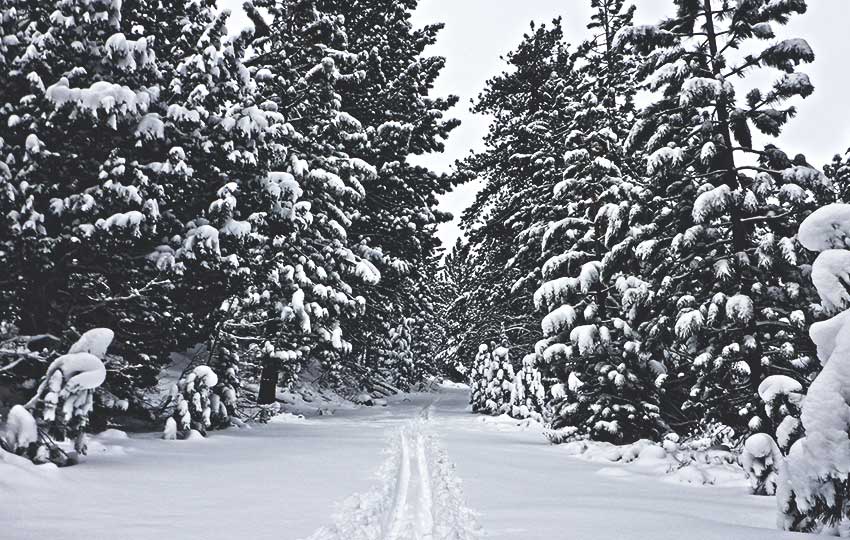 When springtime rolls around and normal people are tending gardens, cleaning garages, and planning summer hikes, we mountain folk are still out cross-country skiing, alpine skiing, snowboarding, and snowshoeing.

“How can that be?” you ask. “Aren’t all the Lake Tahoe ski resorts closed by March or April?”

Many groomed ski areas at Lake Tahoe do, in fact, close in April. If the winter was dry, they’ll close even earlier. And, even if it had been a big snow winter, most ski resorts close by the third week of April. Most people just aren’t thinking about skiing by the end of April.

There are some holdouts, however. Squaw Valley, in recent years, has tried to stay open until July 4th (!). But when I talk about spring cross-country skiing, I’m most mostly referring to venturing off-trail and in Lake Tahoe’s backcountry.

This is where the real magic of spring skiing takes place.

read 10 Tips for Spring Cross-Country Skiing in the Backcountry after you’ve finished reading this article.

Believe it or not, even in the driest of Lake Tahoe winters, you’ll still often find snow the following September and October. It tends to linger around the upper elevations on north facing aspects of mountains.

I won’t necessarily seek out snow for skiing at that time of the year. However, you’ll find snow in the backcountry during March, April, and May. This late season snow makes for incredible “post-season” cross-country skiing and snowshoeing.

With that said, the reasons listed below also apply to cross-country skiing at groomed ski areas. Unfortunately, those resorts often close well before the snow completely melts.

But, just because those resorts close doesn’t mean the ski season is over!

Many of the scenes from my backcountry cross-country skiing video below were filmed during spring conditions. As you can see, the snowpack was uniform and easy to navigate.

The Sierra Nevada snowpack is often stable by the time March and April rolls around. Basically, the snow that fell earlier in the winter has had enough time to “set.” The snow is compressed and is consistently firm.

Where once you might have had to wade through multiple feet of fresh snow, by spring you’ll be able to diagonal stride easily across the top of the snowpack to just about anywhere you’d like venture.

That is, so long as you time it right and ski during appropriate hours. This is either the first few hours of the day or in the evening.

There are no hard and fast rules about what’s the best time to ski during the spring. However, you’ll generally find the most favorable snow conditions between the hours of 9:30-11:30 am and 4:30-6:30 pm.

Prior to 9:00 am, the snow is hard and icy. Then, from about 12-4 pm, the snow is slushy and sticky. Once the sun begins to move past the mountains and the temperatures drop, the snow will begin to refreeze. This, again, makes for favorable travel.

Don’t wait too long to head back to your vehicle, however. As the snow trends toward an icy state, it can firm up unexpectedly fast. Then, you’re stuck combat skiing across ice!

Not surprisingly, the greatest risk for snow-related events is between 12-4 pm. During that time, you may witness or experience a “loose wet” avalanche or smaller snow slide.

If you’re out cross-country skiing in the middle of the day during the spring, avoid steep terrain. Also be careful when traveling during or after a significant spring rain shower. This scenario, too, can destabilize the snowpack on steep terrain and trigger a loose wet avalanche.

If you’ve ever visited Lake Tahoe during a snowstorm, you know how impossible it can be to find a safe and legal place to park your vehicle.

For the most part, on-street parking is prohibited during the winter because it interferes with snow removal operations. I completely understand that the roads need to be plowed and accessible. However, that doesn’t make it any less frustrating not being able to simply pull over to the side of the road in order to do some off-trail cross-country skiing, snowshoeing, or snowplay.

But once warmer spring weather hits Lake Tahoe and the Sierra Nevada Mountains, the snowbanks along the roads begin to melt and recede.

Then, as the bare roads warm up by the sun each day, that stored heat radiates out and further erodes the adjacent snowbanks. The shoulder of the roads become exposed and, voila, more parking!

And you don’t have to worry as much about interfering with snow removal operations since major snowstorms are less frequent in the spring.

Who doesn’t love to wear less clothing and carry less gear when they’re outside exercising and adventuring?

Although I don’t go into full summer mode by wearing shorts and a t-shirt when I’m cross-country skiing during the spring, I do usually only wear light hiking pants and a thin long-sleeve shirt. I also wear a brimmed hat, thin gloves, dark sunglasses, and sunscreen, of course. The reason I don’t strip down to shorts and short-sleeved shirts is because I don’t want a sunburn. Also, I don’t want my exposed skin skidding across firm snow = road rash (or, at least a form of road rash).

Keep in mind that the risk of sunburn (and snow blindness) during spring skiing is very high.

Not only will the sun be bearing down on you from above, it’ll also be radiating from the snow beneath you. It’s not guaranteed, but you can decrease the potential for sunburn by cross-country skiing during the late morning or early evening. The sun simply isn’t as intense during those hours.

Two relatively short windows of time (9:30-11:30am and 4:30-6:30pm) in which to get in a cross-country skiing session doesn’t sound like much. So, why would this be a reason to love cross-county skiing during the spring?

If you’re anything like me, then you know that there’s nothing worse than having to cut short a stellar day of cross-country skiing in primo conditions because you have other commitments to keep.

During the spring it’s guaranteed that, no matter what, the snow turns to crud around noon. And if you’re still out in it at that time, you’ll be slogging your way back to the car.

I’m not a fair weather skier. In fact, I love to ski in blizzards. But believe me when I say that it only takes once to recognize when the snow begins to transform from “corn” to “sticky mashed potatoes.” Or, that it’s beginning to refreeze. See below for an explanation of those states of snow.

Besides, at this point in the season you should’ve already logged plenty of all-day ski sessions. The spring, or “post-season” as I like to call it, should be a time of rejoicing and celebrating the great season you just experienced.

Kind of like taking a victory lap because, after all, days on skis during late March and into April and May (if not longer) are bonus days in my book.

I totally understand that March and April has traditionally been ideal for long, overnight cross-country ski tours. However, Lake Tahoe has experienced in the last few years some dramatic shifts in winter weather:

With overall rising temperatures, having enough snow to ski beyond March is a boon.

Set out too early, however, and you’ll be scraping your way across boiler plate ice.

Show up late, and you’ll become mired in sun-baked snow that clings to your skis like sticky mashed potatoes

In between those two extremes, though, you’ll find about two hours’ worth of the best skiing conditions imaginable. As the top layers of frozen snow begins to thaw for the day, it softens to the consistency of “corn.” Personally, I think it resembles more closely creamed corn, but that’s just me.

Regardless of what you call it, the point is that spring corn snow enables you to turn and glide like you were moving through room temperature butter. You know … the kind of butter that’s creamy and smears uniformly across a piece of toast.

Not only is that little bit of softness in the snow forgiving to the point that you’ll look as if you were making downhill turns on alpine skis, but it also helps to keep your skis tracking straight when diagonal striding.

I would argue that the latter benefit (of helping you track straight) makes spring skiing even more enjoyable than downhill turning. I say this because you can log long miles through uncharted territory. This is because your movement will be more efficient thanks to the soft top layer of snow.

For tips and other helpful information about xc skiing during the spring,

read 10 Tips for Spring Cross-Country Skiing in the Backcountry.

If this is sounds like a foreign concept to you, visualize the two extremes of snow while trying to diagonal striding … a sheet of ice versus two feet of fresh powder. With the ice, you’ll have a firm platform from which to push off of but you’ll spend all of your energy trying to keep your skis from slipping and skittering across the ice (i.e. it’ll be challenging to move forward).

On the other hand, in deep snow you can maintain forward progress but it’ll look a lot more like snowshoeing with cross-country skis than diagonal striding. You’ll experience a ton of resistance by trying to push through too much snow while, at the same time, not find a firm base from which to push off from.

Now, share in the comment section below what it is that you love so much about spring skiing!

For inspiration about learning downhilling technique with cross-country ski gear (in the backcountry), read Cross-Country Downhill. Although it’s slightly dated (published c. 1987), it provides wonderful philosophy about cross-country skiing off the beaten path.

There’s also a lot of technical information regarding learning the Telemark turn on lighter cross-country touring gear. I highly recommend reading this book for those of you looking to cross-country ski in the backcountry.

Keep in mind, though, that this book is written with a more advanced mountain adventurer in mind. Follow the Amazon link and you should be able to find a used copy.