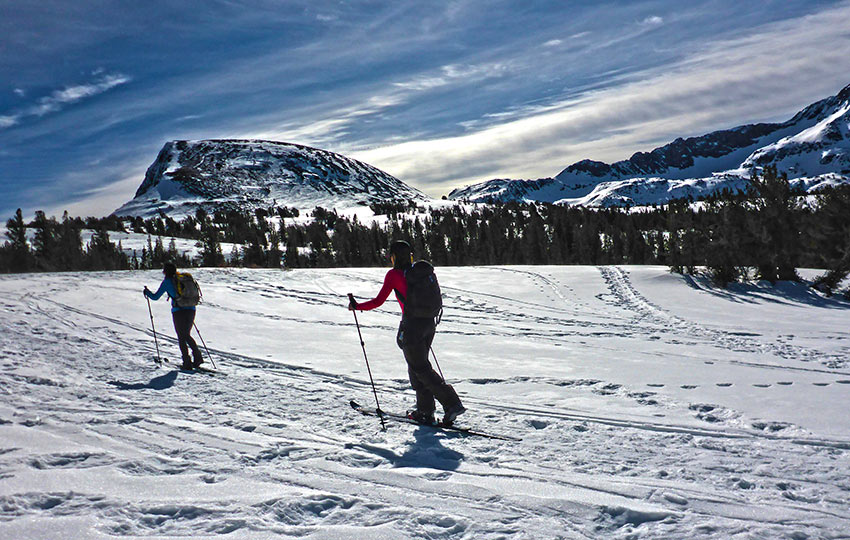 Recreational cross-country skiers rejoiced many years ago thanks to the introduction of “waxless” cross-country skis. No more sticky kick wax to deal with, particularly of the klister variety! And, no more trial and error to achieve the ideal grip for diagonal striding!

As an all-around classic ski, waxless cross-country skis are ideal for hobbyists, recreationalists, and citizen racers because they function well in nearly all conditions.

Not surprisingly, most of the cross-country skiers that I know don’t actually race or need high performance oriented equipment. That said, being able to put on your skis and hit the trails doesn’t tell the whole story of waxless cross-country skis.

Without question, the use of the term “waxless” in the marketing of scale-patterned xc skis worked terrifically. However, in this context waxless only refers to the use of kick wax.

You still need to routinely apply glide wax to the ski’s tips and tails. These are the areas on the base of the ski not covered with a scale or textured pattern.

Unfortunately, many people never got that memo. So, they’ve been cross-country skiing on skis that have dry, oxidized, and dirt-laden bases for years. And, they’re probably are wondering why their skis don’t quite glide like they used to.

I can’t emphasize enough … you need to apply glide wax routinely to the tips and tails of your waxless cross-country skis.

ENJOYMENT: Cross-country skis that don’t glide are no fun. Period.

There are a million fine details to learn about cross-country ski technique. However, there are technically only three phases to classic cross-country skiing (push-off, weight transfer, and glide).

By not routinely applying glide wax to your skis you eliminate that third phase of cross-country skiing. And, by the way, gliding is the best part of xc skiing!

You’re also forced to compromise your cross-country skiing technique. This is because you have to accommodate skis that don’t glide, for which they are designed.

So, if you’re skis constantly stick to the snow because you’re unwilling to wax them, you may as well just put them back in the shed and throw on some snowshoes.

MAINTENANCE: glide wax helps to preserve the bases of cross-country skis by keeping them moisturized, free of dirt, and lubricated.

As a “moisturizer,” ski wax prevents oxidation of the ski base fibers. An oxidized base has an ashen-looking color to it.

With the layer of ski wax, the bases will generally remain free of dirt. Skis will always accumulate dirt in some form. But, at least it becomes more attached to the wax rather than the actual fibers of the ski base.

Ski wax also acts as a “lubricant.” It provides a very thin barrier between the ski bases and debris on the snow. In this capacity the wax can minimize the amount of scratches to the base.

Free movement is a critical factor in being safe in the backcountry. But you can become trapped, isolated, or stranded miles from civilization for many reasons. However, neglecting to wax your skis shouldn’t be one of those reasons because this results in snow sticking and clumping to their bases. Then, you become completely exhausted because you’re working way too hard (because the skis don’t glide!).

In that case, well, maybe you deserve to be coyote food.

Not surprisingly, all of these things make for a safer and more enjoyable experience off-track and in the backcountry. Even when skiing at a groomed resorts, you can still run into problems if you haven’t properly waxed your skis.

Some cross-country ski resorts feature well over 100km of trails. And, some of those trails are relatively far from the ski center or parking lot. At the end of the day ski patrol usually makes a final sweep of the trails. However, they don’t always. And, even when they do, they can never be 100% certain that everyone has gone home.

You and the patroller may have actually passed each other, like ships in the night. So, when you reach the furthest point from the ski resort and are too tired to return (because your skis won’t glide) you may wind up being, again, coyote food.

Thankfully, waxing your skis is something that you can control.

The traditional theory about the way in which cross-country skis glide across snow (using glide wax) is called “controlled friction.” As such, this theory posits that a cross-country ski travels over the thin layer of water created by the friction (heat) between the ski and the snow (as the ski moves across the snow).

So when you use the correct glide wax for the conditions, the layer of water assumes the form of tiny beads thanks to the hydrophobic quality of the wax. Imagine raindrops beading up on your vehicle’s fresh coat of wax. Then, the ski “rolls” over those beads.

So based on the theory of controlled friction, the application of glide wax will either produce:

An important feature of cross-country skis that works in conjunction with glide wax to produce good glide is the structure of the skis’ base.

This “structure” describes the pore-like surface of the base of skis (or snowboards) in the snow sports world.

So, structure serves to decrease the amount of suction a ski will experience. Suction occurs between the ski and the snow when the layer of water the ski is gliding over becomes too great and the structure can no longer effectively shed the excess water.

Visualize two nonporous surfaces stacked on top of each other with a layer of water between them. Maybe think of two pieces of glass for this example. Pulling the glass apart is difficult due to that layer of water (surface tension). However, by substituting one of those pieces of glass with a pitted surface (side directly in contact with the water) makes the job easier.

In that example, the pitted surface represents the structure found in the base of a ski.

Take that idea a step further by applying a thin layer of wax over the pitted surface. In that case, the two surfaces would most likely never adhere to each other at all.

But, if the structure is clogged with excess wax, dirt, grime, debris, and/or too much water, the ski won’t achieve glide. It’ll be difficult to separate from the snow. And, it’ll generally just create an exhausting experience for you.

Keep in mind that throughout this waxing process there are three main objectives we’re trying to achieve:

Now that I’ve spoken ad nauseam about the reasons for waxing your skis, put the fear of death into you, and covered how a ski glides, let us proceed…

If you’re really, really eager to get going, here are two short videos taking you through the entire process.

For an in-depth look at waxing your waxless xc skis, I recommend reading and viewing my step-by-step tutorials. Just click that link above this section to navigate to the tutorial part of this series.

Even the 10-minute operation in the video above is more thorough and longer lasting. So, if you have the time I recommend performing that 10-minute version. It’ll ensure you’ll have a more fun and safe cross-country skiing adventure.

I recommend picking up a copy of The Complete Guide to Cross-Country Ski Preparation by Nat Brown. This book provides an in-depth discussion of preparing your skis. And, although it’s a bit cerebral for beginner skiers and people with little knowledge of skiing technique, the information is presented in an easy to understand format. So, I find it to be an invaluable resource that provides a thorough overview of cross-country ski preparation, which ultimately will help you to become a better cross-country skier. Follow the Amazon link and you should be able to find some options for buying a used copy. Highly recommended and worth having in your library.