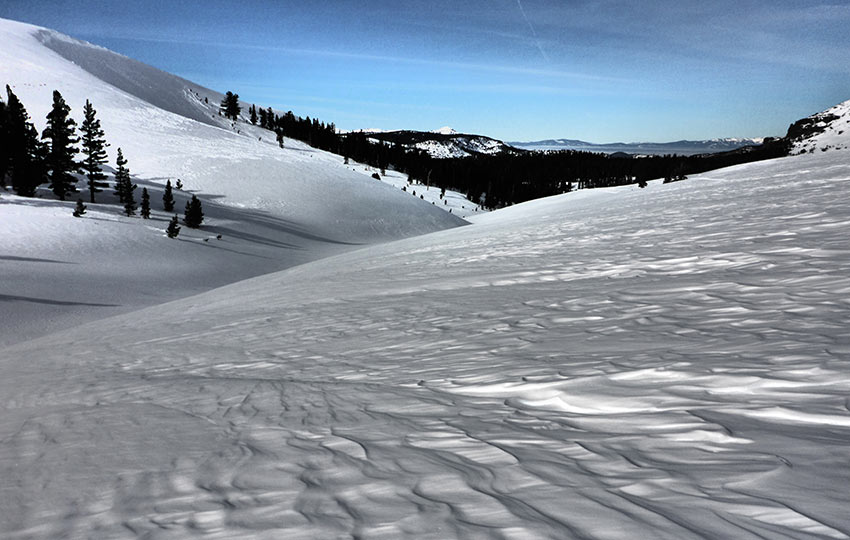 Winter at Lake Tahoe is great for choose-your-own adventures in the backcountry. There are additional considerations to take into account during winter travel. However, your options are plentiful when the snowpack is stable, you know your gear and its capabilities, and you’re willing to embrace your inner pioneer spirit.

For this article, I outline one such adventure in the form of an overnight cross-country ski tour I took to Little Round Top in 2017.

For many winters, I wanted to cross-country ski through the high meadow of Meiss country. The specific area I’m referring to, called Meiss Meadow, is located north of Carson Pass along the Pacific Crest Trail/Tahoe Rim Trail.

This swath of land is only a few miles long. However, it’s flat, expansive, and sits between Red Lake Peak and Stevens Peak on the east side of the meadow and Little Round Top and its ridgeline on the west.

I also wanted to xc ski up to Little Round Top mountain because part of a now defunct cross-country ski race called the Echo to Kirkwood race used to travel near this mountain.

My plan was to begin at the north lot of Carson Pass.

I would cross-country ski northwest along the Pacific Crest Trail/Tahoe Rim Trail through Meiss Country, and then spend the night a couple of miles north of Showers Lake.

The following morning, I would climb up to Little Round Top and then make my way southeast back to Carson Pass via the ridgeline.

On January 30th, 2017, I grabbed my gear, drove to the parking lot on the north side of Carson Pass, and hit the trail for an overnight cross-country skiing adventure.

Considerations for Cross-Country Skiing to Little Round Top

Parking for Cross-Country Skiing to Little Round Top

Park at the Sno-Park at the top of Carson Pass (north lot) on State Route 88.

You can also park at the south lot. However, be careful crossing SR 88 as there are blind corners and the highway hosts a lot of traffic.

You’ll need a Sno-Park permit ($5/day, $25/season). The permits can be purchased in Meyers or South Lake Tahoe. You can’t buy them at the actual Sno-Park. And, they will save you from receiving a $100 ticket (without one).

For the majority of January, 2017, the snowpack in the Sierra Nevada Mountains was highly unstable. This was due to the massive amounts of fresh powder we received during a long continuous stretch of time.

Essentially, the snow kept falling and never had a chance to properly set or stabilize.

Fortunately, by the end of the month the Sierra Avalanche Center classified the avalanche danger “low” on all aspects of the mountains. The forecast was also favorable, calling for freezing temperatures at night and clear skies.

Whenever I travel in the backcountry, particularly during the winter, I start by considering worst case scenarios.

These scenarios compel me to identify routes in which I can evacuate the backcountry as quickly and safely as possible.

In the movie Ronin, Robert Dinero’s character says, “I never walk into a place I don’t know how to walk out of.”

I always want to know what my options are for exiting the backcountry when shit goes sideways.

To hammer the point home I conjure another priceless Dinero line. This one from the movie Heat, in which he says, “Don’t let yourself get attached to anything you are not willing to walk out on in 30 seconds flat if you feel the heat around the corner.”

You need to be willing to make the hard call to turn back, abandon your adventure, or drastically modify your plans in a worst case scenario. This could be because of unforeseen circumstances, poor route planning, impending bad weather, mishaps, accidents, or emergencies.

If you can’t make that decision, you shouldn’t be traveling in the backcountry.

Always remember that the summit is optional, but the descent is mandatory.

Since I knew this stretch of the Pacific Crest Trail/Tahoe Rim Trail fairly well, I identified multiple exit routes in case of emergency.

Although none of the options would’ve been easy to execute due to the snow and distance that I would have had to negotiate, I at least had options. My evacuation routes were to:

Having identified some evacuation routes, I then considered the specific route I would take to Little Round Top.

Realistically, there were only two obvious ways in which to travel. Either head through the meadow on day one or travel the ridgeline directly to Little Round Top.

My primary concern, as it always is during winter travel, was whether or not I would get caught in inclement weather. Since this was an overnight cross-country ski tour, I was more concerned about getting on caught in bad weather on the first day.

I was less concerned about bad weather for the second day since I was going to be coming out of the backcountry by then.

The forecast hadn’t called for anything but clear skies and cold temperatures. That said, I’ve traveled around the Carson Pass area enough to know that storms can (and do) roll in unexpectedly.

I decided to choose the conservative route by traveling north through the meadow on the first day. I’d be at a lower elevation and there were a number of safer camping options of which I could choose if I couldn’t make the miles by sunset.

Also, by following the Pacific Crest Trail north I would be breaking trail through the meadow with the sun at my back. This would help to keep my face and eyes protected from its rays and glare off of the snow.

In contrast, had I skied directly to Little Round Top via its continuous ridgeline, I would’ve been entirely exposed throughout the day and night.

Besides, by skiing along the ridgeline first thing in the morning would give me plenty of daylight in which to negotiate the new (to me) terrain safely.

Although I would be traveling south and directly into the sun while traversing the ridge the following day, it was early enough that the sun wasn’t as intense. And, at that time of the day, its rays would reflect at a lower angle limiting the exposure to my face.

I don’t know the actual overnight temperature, but it felt like the high single digits or low teens (F). It really didn’t matter, though, because I was warm all night.

On my way up to the ridge the following morning, I used Fischer EZ-Skins with my S-Bound 112 backcountry cross-country skis. These skins aren’t nearly as aggressive as the full length skins you would use on alpine touring or Telemark skis.

However, they definitely made the ascent up the ridge more manageable. They also prevented me from skidding across the wind scoured and sun baked snow once I began to traverse the upper terrain.

I also carried with me a set of Kahtoola Microspikes just in case. And believe me, I wore them instead of my skis on some sections of the ridge.

There was a lot of ice on top and, when I travel alone, I mitigate risk factors whenever possible.

The trip was a blast!

Cross-country skiing through that high meadow was as rewarding (and exhausting!) as I had hoped.

Throughout the 24-hour adventure I was treated to an incredible sunset and sunrise, pristine views of Desolation Wilderness, and Lake Tahoe bathed in fog. I also had plenty of views of snow-covered mountain ranges as far as the eye could see.

The icing on the cake was that I got to witness a Red-tailed Hawk having way too much.

For ten minutes, I watched as it rode the thermals and created graceful sine wave trajectories. It dive bombed in a full tuck, arcing upward while briefly flapping its wings. Then, it returned to a full tuck as it ascended to the heavens.

The only real issue I had was that I arrived at the trailhead an hour too late. This was poor execution on my part. The plan was to leave my house at noon. However, I didn’t actually start driving until 1pm.

Thanks to losing that one little hour, I arrived at my alternate campsite just after sunset. I wasn’t confident about pushing on further from that point. This is because I would’ve been venturing into uncharted territory at higher elevations at night.

For a story-like retelling of this adventure, read my article published by the Pacific Crest Trail Association (Spring 2019).