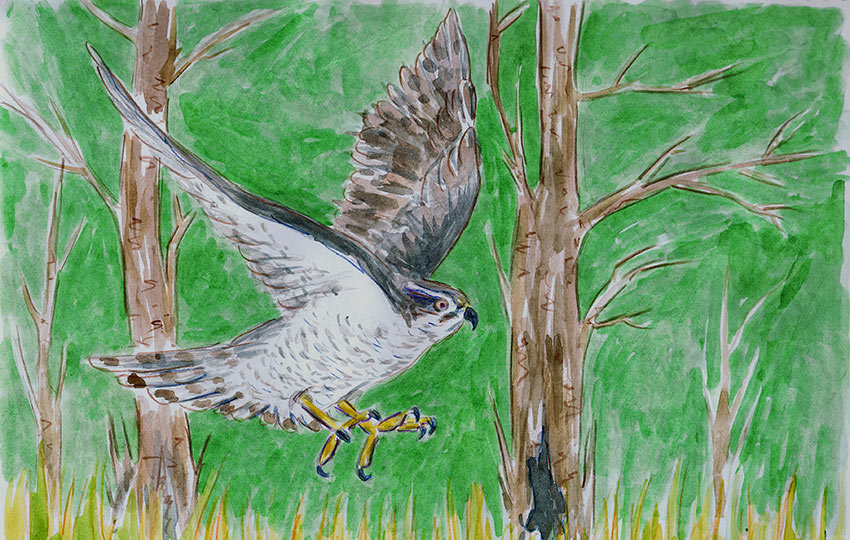 Northern Goshawks are a type of hawk called an Accipiter, which means they are equipped with broad but short wings and long tails akin to rudders. Northern Goshawks live in remote forested areas across Northern Europe and Asia, as well as much of North America (including the Sierra Nevada Mountains near Lake Tahoe).

Due to the physical attributes of Northern Goshawks, they possess superior flying agility enabling them to capitalize on living and hunting in large zones of forests.

Juvenile Northern Goshawks feature brown and white colors checkered and streaked across their entire body, and narrow dark horizontal bands on their tails.

Adult Northern Goshawks have more contrast in their appearance thanks to their light gray underbellies and dark slate-colored backs and heads. Their head is particularly distinct due to its dark cap, white “eyebrow” just above the eye, and a blackish eye line that tapers back to the shoulder. The eyes of a Northern Goshawk are often red.

While hunting they’ll often perch midway up a tree in the middle of the forest, on the edge of the forest, or along a riparian corridor (a waterway such as a creek or river) and scan the area for prey. Once they’ve identified a target they swoop out of the tree in pursuit, alternating between powerful wingbeats and moments of gliding. Their short, broad wings allow them to gain speed quickly while their long tails enable them to change direction effectively.

Once they’ve get the drop on their prey, Northern Goshawks tackle it feet first, gripping it with their powerful talons. Northern Goshawks are known to crash through brush and bramble in forests featuring thick vegetation (and sometimes into the water when hunting near a water source) in order to catch their prey. Their style of hunting is sometimes described as “reckless” for it appears Northern Goshawks abandon all concern for themselves while in pursuit of their next meal.

In the Sierra Nevada Mountains, Northern Goshawks hunt birds such as Steller’s Jays, Northern Flickers, and Sooty Grouse. They also hunt small mammals such as squirrels, rabbits, and hares.

Northern Goshawks build nests in tall trees at the junction between the trunk and a large horizontal branch. They will often select a nesting tree at a natural break in the forest or near a dirt road or trail. Northern Goshawks to rotate between multiple nests each year, but they will typically only defend one of them.

They are adamant about keeping intruders away, and are known to attack people and other critters that come too close to their nest. Steer clear if you hear a Northern Goshawk calling.

After mating, the female produces between 2-5 eggs. However, she’ll only lay one at a time, waiting a couple days between laying each egg. Once the eggs are laid, she’ll stay with them during the approximately month-long incubation period. The female will remain with her offspring for another month after they hatch.

Although Northern Goshawks are known to be secretive (as evidenced by their preference for living in remote forested areas) they have been, for over 2,000 years, trained by falconers as hunting partners. In fact, you can find numerous videos online of contemporary falconers using their Northern Goshawks to hunt. It’s impressive to watch Northern Goshawks in action but keep in mind, however, that not all hunters share the same ethics.

While viewing some videos I got the impression that the owners weren’t hunters at all and that they simply liked owning a predator bird so they could watch it kill stuff.

If you’ve like this post and would like to learn more about Northern Goshawks, I recommend checking out All About Birds. The website is developed and maintained by Cornell University’s Lab of Ornithology. Very thorough stuff.

Not nearly as majestic as yesterday's Bald Eagle,

Although it's not in full extension, I'd still con

Non-stop action these past couple weeks with work